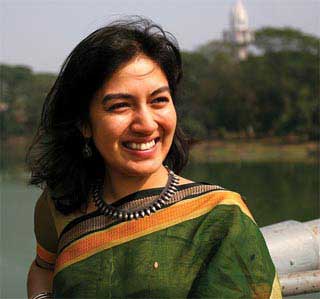 Received wonderful news that writer, Dr Tahmima Anam has been invited to the South Asian Diaspora Convention this July. She adds another interesting dimension to the event which might otherwise be dominated by geopolitical-economic topics. She is speaking on The Importance of Creativity in Emergent South Asia.

Her Bio: Paris, New York to Bangkok and finally Britain
which I gleaned from the Internet : Tahmima Anam was born in Dhaka, Bangladesh, in 1975 and grew up in Paris, New York and Bangkok, due to her father's career with UNESCO.  Her father, Mahfuz Anam, actively participated in the Bangladesh Liberation War of 1971, and is currently the editor and publisher of the Bangladesh Daily Star - Bangladesh's most prominent English language newspaper. He is also chairman of a Bangladeshi NGO called the Freedom Foundation. Her grandfather, Abul Mansur Ahmed, was a renowned satirist and politician.


Tahmima Anam attended Harvard University, where she earned a Ph.D. in Social Anthropology. In 2005 she completed an MA in Creative Writing at Royal Holloway, London, and is the recipient of a Writing Fellowship from the Arts Council of England.  A Golden Age is the first in a planned trilogy that brings to life the creation of her native country.

Her Book: A Golden Age
Arriving at a venue that will pool people from all points of the diaspora, it would be interesting to see if she will make comments, provide observations or answer questions related to her book "A Golden Age" (check out the review at http://www.sepiamutiny.com/sepia/archives/005077.html Her novel is well known also as  one of the first to be put out by a western publisher to have the Bangladesh war of independence as a backdrop.
Posted by easyj at 03:44