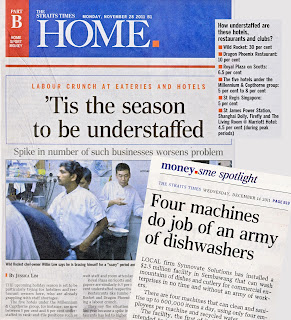 F&B firms in the small island republic may have just had problems dealing with dirty dishes disappear. Many restaurant owners there have problems sourcing (and keeping) dishwashing cleaning staff in their kitchens. Now there is a cost effective (actually cheaper), legal and more efficient solution available. They can now have their dishes and cutlery cleaned OFFSITE at Singapore’s first dishwashing factory.


In an article in Singapore’s main daily, The Straits Times (14 Dec 2011), titled “Four machines do job of an army of dishwashers” a local company Synnovate Solutions can not only clean their dishes but also SAVE money for its clients.
The local firm collects all the dirty dishes/cutlery at the end of day, cleans and returns them the next day. Yes, the restaurant needs to keep a second set of cockery and cutlery but according to the report the cost can be recovered easily within “three to six months”


Lawrence Low, the managing director of Synnovate, who has been involved in both the F&B and manpower industries, saw the writing on the wall more than a year ago and invested in state-of-the-art automated dishwashing machines. As the Singapore Government seeks to reduce reliance on foreign labour and that such jobs are unpopular with locals, he is using the latest technology so that F&B firms can “improve productivity, reduce reliance on foreign labour, conserve energy and cut costs.”
If you would like to know more you can contact Lawrence at tel: +65 6659 0318 or e-mail:  cylow.synnovate@gmail.com
[below, text of news report from: THE STRAITS TIMES Wednesday, December 14 2011 Page B19. Money.SME Spotlight.]

Four machines do job of an army of dishwashers

LOCAL firm Synnovate Solutions has installed a $2.5 million facility in Sembawang that can wash mountains of dishes and cutlery for commercial enterprises in no time and without an army of workers. There are four machines that can clean and sanitise up to 600,000 items a day, using only four employees per machine and recycled water.

The facility, the first of its kind in Singapore, is intended to improve productivity, reduce reliance on foreign labour, conserve energy and cut costs. Synnovate runs the business like a laundry service. It sends a truck to food and beverage outlets to pick up crockery and cutlery in tubs - a tub costs $9 and there is a minimum order of five tubs - and takes them back to Sembawang.

The firm has attracted 13 customers, including Swan Lake Catering and Asian Kitchen, in the 12 months it has been operating the facility. Synnovate chief executive Lawrence Low set up the company to meet the needs of the F&B trade.

F&B firms will save on having to buy dish-washing machines, detergent and utility bills and they also do not have to worry about hiring and keeping workers to wash and clean, he said. "There is difficulty getting workers for the hotel and F&B sector, and dish-washing jobs are among the least attractive," said Mr Low.

"Singaporeans do not like dish-washing, the Malaysian market has dried up and workers from China are no more readily available. Foreign illegal workers are not worth the risk." So the industry will have to rely on other innovative solutions, said Mr Low.

"Synnovate Solutions can engage four foreign workers at the most to do the job of 40 workers," he said. "This means a significant reduction in reliance on foreign labour."